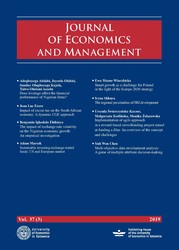 Does leverage affect the financial performance of Nigerian firms?

Aim/purpose – This study examines the relationship between leverage and financial performance of Nigerian firms between the years 2007 and 2016.
Design/methodology/approach – The study adopted ex-post facto research design to retrieve and study data for events which were already in existence. Inferential statistics adopted econometrics models with a concentration on panel data using regression analysis to achieve the three specific objectives of the study. The surrogates for the independent variable (financial leverage) were Debt Ratio (DR); Debt-Equity Ratio (DER); and Interest Cover Ratio (ICR) while Return on Capital Employed (ROCE), the only dependent variable, was used as financial performance proxy. Three control variables – Firm Size (SZ), Sales Growth (SG) and Growth in Gross Domestic Product (GGDP) were included in the model to capture other firms – specific and macroeconomic variables that may have an influence on the financial performance of the selected firms.
Findings – The Random Effects Generalised Least Squares (REGLS) revealed a positive and significant effect between leverage (DR and DER) and ROCE (p < 0.05). However, ICR has a positive but insignificant effect on ROCE (p > 0.05). The outcome of the study was consistent with the Static trade-off theory of capital structure.
Research implications/limitations – The study suggests that firms should continuously employ debt capital in order to benefit from available tax shields which ultimately enhance profitability. The limitation of the study is that only firms in the food and beverage sector in Nigerian business environment were covered by the study.
Originality/value/contribution – The study contributed to the existing theory and literature by using empirical evidence from an emerging market to bridge the existing gap in knowledge of the effect of leverage on the performance of firms.

Impact of excise tax on the South African economy: A dynamic CGE approach

Aim/purpose – This paper analyses the impact of excise tax on the South African economy by means of a Dynamic Computable General Equilibrium (CGE) model. We utilised a policy simulation to evaluate the effects of an excise tax, with the results indicating that the rise in excise tax should not impinge on lower revenue households, as long as the greater government revenue flows to those households.
Design/methodology/approach – The model applied in this study includes a specific database composed of a Social Accounting Matrix (SAM) constructed from data for the period 2010. A specific indirect tax block was disaggregated in such a way that VAT, excise tax and fuel levy taxes could be analysed. The household sector was further subdivided into 14 different revenue households.
Findings – The simulation results indicate that GDP is linked to certain variables, for example absorption and consumption, which are negatively marked by the short run settings. The trend changed positively from the base year 2018 to the following year 2019 with a constant increase until 2023. The main reason for the increase is that the change in investment proportionally affects the total absorption in the market system.
Research implications/limitations – The CGE model has been used extensively by the researchers for economic analyses of various projects. The production data constitute the main limitation, as Statistics South Africa has delayed collecting recent data. For this reason, data for the year 2010 were used in the SAM as the database for the CGE model.
Originality/value/contribution – The specific economic tool, i.e. the dynamic CGE model, used in this study was seen to be the best model as far as an analysis of the excise tax was concerned. This model has never been used to study the excise tax in South Africa before, although Erero (2015) analysed the effects of increases in VAT through a dynamic CGE model, and found that the percentage increase in VAT would not affect lower revenue households negatively if the higher government revenue flowed to those households.

The impact of exchange rate volatility on the Nigerian economic growth: An empirical investigation

Aim/purpose – The aim of the paper is to present smart growth, which is one of the pillars of the Europe 2020 strategy, as a challenge for Poland.
Design/methodology/approach – The paper includes a critical analysis of the literature, analysis of domestic and EU documents, and Eurostat statistical data. Comparative ana-lyses in time and space were conducted using basic statistical methods (descriptive characteristics of distributions, measures of dynamics).
Findings – The analysis carried out in the paper showed that Poland’s position against the EU-28 countries in terms of smart growth is relatively good. It is mainly noticeable in the implementation of education-related targets, whereas Poland’s situation in the R&D area is much poorer.
Research implications/limitations – The main implications include the fact that the identified degree of Poland’s implementation of the elements of smart growth, may be a basis for drawing up necessary actions to be taken in the analysed areas.
Originality/value/contribution – The paper evaluates the implementation of the smart growth targets included in the Europe 2020 strategy in Poland against the EU-28 countries and shows the status and perspectives of the implementation of smart growth in Poland in the light of domestic documents.

The regional peculiarities of SRI development

Aim/purpose – The aim of the paper is to examine the regional peculiarities of development of socially responsible investment markets based on the main trends in the global socially responsible investment (SRI).
Design/methodology/approach – Peculiarities of SRI development are considered in Europe, the USA, Canada, Asia, and Japan. The analysis is based on the data from local SIF surveys: Eurosif, US SIF, JSIF, RIA Canada, RIAA and the Global Sustaina-ble Investment Alliance (GSIA). In addition, the data from scientific articles and World Bank databases are used.
Findings – SRI development by regions is differentiated according to their dynamics, structure of participants, SRI-strategies, structure of assets in the portfolios, and the barriers or motives for the SRI development. There is a set of macroeconomic indicators whose influence on SRI has been analysed and it can be concluded that only indicators of openness can be linked with the regional SRI market development.
Research implications/limitations – As the European market takes the largest share of the SRI market, the more detailed analysis has been conducted regarding this region. Study of both theoretical and practical aspects of socially responsible investment has shown that there is a lack of a unified global concept of socially responsible investment. Within the paper, socially responsible investment is considered as an investment in tangible and intangible forms focused on creating long-term value taking into account the impact on the environment, social sphere, quality control, and ethical obligations.
Originality/value/contribution – The paper extends and develops the existing research into the issue in several ways: the peculiarities of regional SRI development are defined, and a comparative analysis of SRI regional markets is conducted; the hypothesis that SRI markets are driven by other factors than those which drive the conventional investment market has been proposed; it has been shown that the level of SRI market development makes an impact on strategies, participants and structure of assets, and that macroeconomic indicators could be considered as preconditions for SRI development.

Implementation of agile approach in a reward-based crowdfunding project aimed at funding a film: An overview of the concept and challenges

Aim/purpose – The research aims to identify and evaluate factors impacting the implementation of an agile approach in a crowdfunding project with a goal to fund a film.
Design/methodology/approach – The research was conducted in March-April 2018, and based on qualitative methods of gathering data from the Polish market.
Findings – We point to the two groups of factors impacting whether or not a film team can implement the agile approach in a crowdfunding project: 1) the first group of factors refers to the iterative testing of ‘the work produced’ during the project, including testing of final film elements; 2) the second group of factors refers to team management such as team goal, team engagement and communication, and conflicts between team members. The findings indicate that a potential transition to the agile approach would require significant adjustments of the current methods of conducting film projects.
Research implications/limitations – The managerial implications of this discussion may lead to raising the filmmakers’ familiarity with the agile approach as a new project management framework for the Polish filmmakers. The limitations of the presented study are mostly connected with the qualitative methods applied in the process of gathering data.
Originality/value/contribution – This paper provides useful insights into the methods of project management in the film industry.

Aim/purpose ‒ The traditional data envelopment analysis (DEA) is popularly used to evaluate the relative efficiency among public or private firms by maximising each firm’s efficiency: the decision maker only considers one decision-making unit (DMU) at one time; thus, if there are n firms for computing efficiency scores, the resolution of n similar problems is necessary. Therefore, the multi-objective linear programming (MOLP) problem is used to simplify the complexity.
Design/methodology/approach ‒ According to the similarity between the DEA and the multiple attribute decision making (MADM), a game of MADM is proposed to solve the DEA problem. Related definitions and proofs are provided to clarify this particular approach.
Findings ‒ The multi-objective DEA is validated to be a unique MADM problem in this study: the MADM game for DEA is eventually identical to the weighting multi-objective DEA. This MADM game for DEA is used to rank ten LCD companies in Taiwan for their research and development (R&D) efficiencies to show its practical application.
Research implications/limitations ‒ The main advantage of using an MADM game on the weighting multi-objective DEA is that the decision maker does not need to worry how to set these weights among DMUs/objectives, this MADM game will decide the weights among DMUs by the game theory. However, various DEA models are eventually evaluation tools. No one can guarantee us with 100% confidence that their evaluated results of DEA could be the absolute standard. Readers should analyse the results with care.
Originality/value/contribution ‒ A unique link between the multi-objective CCR DEA and the MADM game for DEA is established and validated in this study. Previous scholars seldom explored and developed this breathtaking view before.