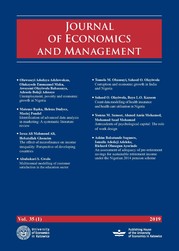 Aim/purpose – This study investigates the links between unemployment, poverty and economic growth in Nigeria between the periods, 1985-2015.
Design/methodology/approach – The paper employed the Augment Dickey Fuller test for unit root test, Johansen cointegration for cointegration, Ganger causality for causality test and Error Correction Model to establish the short-run links between the variables.
Findings – The unit root test result revealed that the variables trend with time indicating their failure of integration at level. However, they were found to be stationary at first difference. The causality result revealed that there is no causal relationship between unemployment, poverty and growth in Nigeria. Similarly, the cointegration results showed that there is no long-run relationship between unemployment, poverty and economic growth in Nigeria. The short-run parameter estimates indicated that unemployment has a negative and significant relationship with growth. However, the coefficient of the interaction between unemployment and poverty is positive and significant at the conventional level.
Research implication/limitations – This study suggest that the output growth in the country will occur even if there are poor people as defined in absolute terms. The economy will still expand even if the number of poor people increases. This is also the case in the short run, revealing that the economy has grown even though over the years, the numbers of poor people have increased. Thus, there is a need for stable macroeconomic policies that would ensure equal distribution of income so that the poor also benefits from the country’s growth.
Originality/value/contribution – This study empirically examines the contribution of output growth towards employment generation and poverty reduction using data sets from the Central Bank of Nigeria, National Bureau of Statistics and World Bank.

Aim/purpose – Marketing is an important area of activity for the vast majority of enterprises. Many of them try using marketing data analysis. Both the literature and the practice of many enterprises describe the use of advanced data analysis. However, interpretations of this concept differ. The aim of this paper is to identify the interpretation of advanced data analysis in marketing, in support of decision-making processes applied in the retail trading sector.
Design/methodology/approach – The study was conducted using a systematic literature review, suggested by B. Kitchenham (2004), extended by C. Wohlin & R. Prikladniki (2013). This method was modified and expanded through the division of the whole study into two phases. Each phase is intended to facilitate obtaining answers to different important research questions. The first phase constitutes an exploratory study, whose results allow the detailed analysis of the literature in the second phase of the study.
Findings – The results of this study of the relevant literature indicate that scholarly publications do not use the phrase ‘advanced data analysis’, and its context is described with the term ‘data analysis’. Another term used broadly within the sphere of data analysis is ‘big data’. The concept of ‘data analysis’ in marketing is focused around the term ‘big data analytics’ and terms linked to the word ‘customer’, such as ‘customer-centric’, ‘customer engagement’, ‘customer experience’, ‘customer targeting service’, and ‘customers classification’. The study of the literature undertaken indicates that marketing employs data analysis in such areas as customer needs identification and market segmentation.
Research implications/limitations – The study of the literature review was carried out using selected four databases containing publications, i.e. Web of Science, IEEE, Springer and ACM for the period 2008 to 2018. The research described in the article can be continued in two ways. First, by analysing the literature presented in this paper on advanced data analysis in marketing using the method called snowball sampling. Sec-ondly, the results obtained from the first stage of the study can be used to conduct the study with other databases.
Originality/value/contribution – The main contribution of this work is the proposal of modifying the systematic literature review method, which was expanded through the introduction of two phases. This division of two stages is important for conducting stud-ies of literature when there are no clear, established definitions for the concepts being employed. The result of the study is also a set of ordered terms and their meanings that clearly define advanced data analysis in marketing.

The effect of microfinance on income inequality: Perspective of developing countries

Aim/purpose – Studying the impact of microfinance on income inequality from a macro-economic perspective.
Design/methodology/approach – Cross-sectional regression analysis is used to measure the effect of microfinance on the Gini index in a sample of 30 developing countries from across Africa, Asia, Latin America, and Europe. A set of control variables are added to the model including: inflation, educational attainment, democracy, population growth, percentage of arable land to strengthen the model’s reliability.
Findings – Results indicate that neither a positive nor a negative impact of microfinance on Gini index could be significantly proved for the sample countries.
Research implications/limitations – Due to lack of data availability, research is conducted on a small sample of 30 countries. Therefore, to obtain more generalisable results, it is recommended for future research to use a larger sample.
Originality/value/contribution – Microfinance is becoming a focal issue in alleviating poverty and inequality, and this paper’s main contribution is that it explores this matter from a macro-economic perspective by looking at the holistic impact of microcredit on a sample of developing countries. Hence, the paper provides further investigation and suggestions for a better implementation of microfinance policies.

Multinomial modelling of customer satisfaction in the education sector

Aim/purpose – This paper aims at analysing the influence of the quality of services offered by higher learning institutions on student satisfaction.
Design/methodology/approach – Stratification sampling design was utilised to select a representative sample of 606 students from different schools/faculties of Mzumbe University in Tanzania. Data were collected using the closed questionnaire. The data were then processed and analysed through the prediction of categories of response variables of satisfaction against several explanatory variables using multinomial logistic regression model.
Findings – The results indicated that responsiveness, reliability, tangibility, assurance and empathy variables have significant influence on student satisfaction. The study concluded that improving services on these variables is bound to lead to maximisation of satisfaction which would result into increased students’ enrolment.
Research implications/limitations – The findings of the investigation reveal further that apart from competence and attitude of lectures, teaching facilities was another important criterion for satisfaction.
Originality/value/contribution – Understanding the quality of services offered by higher learning institution is imperative for the development of any institution. This paper serves as a bench mark in evaluating the quality of services as perceived by students.

Corruption and economic growth in India and Nigeria

Antecedents of psychological capital: The role of work design

Aim/purpose – The main objectives of this article are to estimate percentage of pre-retirement savings that is needed, based on the current salary scale, to sustain academic and non-academic staff of Federal Universities in Nigeria in retirement using University of Lagos as a case study.
Design/methodology/approach – The methodology of the article was designed by modifying the life-cycle model of household behaviour combine with the target replacement ratio benchmarks for different income levels as used by Pension Commission 2004, expressed in 2013 earning terms.
Findings – The research findings show that the lowest income earner with entry age of 25 years and retirement age of 65 years should, without any interruption throughout the service years, contribute a minimum of pre-retirement savings of 28.01% on an annual basis from his or her emolument to maintain the pre-retirement standard of living once he/she has ceased working.
Research implications/limitations – The scope of this research study is subjected to some limitations: (1) scarcity of pension financial data in Nigeria; (2) the academic and non-academic staff of Federal Universities in Nigerian using University of Lagos as a case study.
Originality/value/contribution – The study has established the minimum contribution rate into the Retirement Savings Account so as to meet the internationally acceptable replacement ratio for employees of the Nigerian Federal Universities.