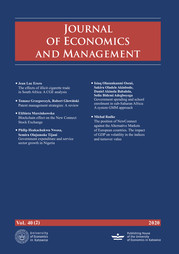 The effects of illicit cigarette trade in South Africa: A CGE analysis

Aim/purpose – This paper evaluates the effects of the illicit cigarette trade on the South African economy through a static Computable General Equilibrium (CGE) model. Indeed, the illicit cigarette trade occupies a prominent place in public debate in South Africa.
Design/methodology/approach – The base year Social Accounting Matrix (SAM) of the model is constructed from the data for 2015 to reflect the most recent information. The model includes a number of direct and indirect tax variables. The indirect tax section is decomposed into VAT, excise and fuel levy for analysis purposes. The household section considered all income categories with 14 distinct deciles.
Findings – One policy simulation was carried out to evaluate the effect of the illicit cigarette trade on growth and income distribution. Our findings show that the loss of R8 billion in tax revenue given the current growth of the illicit cigarette market has impacted negatively on the country’s GDP and employment rate.
Research implications/limitations – We utilised the latest available data for 2015 when constructing the SAM that was used as database for the model. The assessment of the illicit cigarette trade through the application of a CGE model provided strategies for the implementation of a specific Cigarette Governing Body, with distinct areas of accountability focusing solely on illicit cigarettes.
Originality/value/contribution – There is a need for urgent attention from the state to combat the trade in illicit cigarettes, as most of this illegal product is produced in South Africa. This paper contributes by expanding awareness amongst policy makers and the public regarding the connection between the illicit trade in licit goods, corruption, and organised criminal networks.

Aim/purpose – Intellectual property right management plays an increasingly important role in firms’ business strategies. While empirical findings prove that strategic intellectual property management is positively correlated with multiple dimensions of firm performance, those competences are still rare. The research on the strategies of patent management is dispersed. Therefore, the aim of this paper is to present an analysis of the main patent strategies.
Design/methodology/approach – The method used in this paper is a narrative literature review in the area of strategic technology management.
Findings – This analysis of the most advisable patent strategies may allow its users to identify the best strategy in the given circumstances. The main patent strategies are: offensive, defensive and leveraging strategy.
Research implications/limitations – This analysis may be of importance not only for researchers dealing with technology and intellectual property management but also for firms willing to efficiently capture the value of their patent rights. A limitation of this literature review is the relatively small number of empirical studies in this area of strategic management.
Originality/value/contribution – This paper fills the research gap of the strategic choices left to managers in high-tech firms. The originality and value of this paper stem from the comprehensive analysis of patent strategies. Each of the presented strategies has their pros and cons in a given situation, illustrated by the presented cases. The choice between them should be made taking into account the enumerated factors.

Aim/purpose – Blockchain is a distributed database system widely popular in social and business spheres. As a result, interest in blockchain technology is utilised by listed companies, who, thanks to the announcement of blockchain application, record a significant increase in the share value. The aim of this publication is to analyse the situation with regard to companies listed on the New Connect market, who over the last two years, expressed an interest in blockchain technology in their communication with investors.
Design/methodology/approach – Observing the range of applications of this technology in business, a study was conducted to check if and how the information on using the blockchain technology affects the quotations of the New Connect market listed companies that applied it. Qualitative comparative analysis (QCA), a method developed by Ragin was chosen as a complementary research method. An underlying assumption of QCA is that social phenomena involve complex causality.
Findings – In most cases, companies releasing blockchain application announcements counted on fast and high growth of the quotations. In most of the analysed cases, blockchain technology utilisation announcements were not fulfilled. This could be a result of conscious tactics towards investors, a rapid increase in quotations and/or a lack of competence and resources to implement blockchain technology. Investors should analyse the business activity of a company before investing.
Research implications/limitations – Research is conducted with a small sample of 11 companies from the New Connect market in Poland. Consequently, to obtain more general results, it is recommended for future research to use a larger sample such as other stock exchanges in Europe and USA.
Originality/value/contribution – The research revealed that new blockchain technology is used by some listed companies on the New Connect market for short-term share growth. Investors are becoming increasingly more attracted to the fashion for the new blockchain technology without understanding its mechanism. Accordingly, this study will also attempt to explain such a mechanism.

Aim/purpose – Provision of basic education is pertinent to human capital development, poverty alleviation and abating the threat of insurgence in Africa. Governments in different countries in sub-Saharan Africa (SSA) do budget and spend various amount of money on education every year, but little is known about the effect of such spending on education, especially primary school enrolment which forms the basic educational foundation.
Design/methodology/approach – Using data for 24 countries from 2000 to 2016, this study assesses the effect of government educational spending on primary school enrol-ment in SSA by employing the System-GMM approach.
Findings – The results show that government spending has significant (p ≤ 0.05) and positive effect on primary school enrolment in SSA. The results are further confirmed using different diagnostic tests which include the Arellano–Bond test for first and second order autocorrelation in the disturbance term and the Hansen J-test for the validity of the instrumental variables. Other variables analysed (control), which have positive influence on enrolment, include GDP, general number of teachers available, and percentage trained teachers. Population growth rate negatively influences enrolment.
Research implications/limitations – The study therefore concludes that increasing spending on education by governments in SSA is sine qua non for improving primary school enrolment rate in the region.
Originality/value/contribution – This study has contributed empirically and theoreti-cally to the body of knowledge. The scope covered also makes the study uniquely robust and different from previous ones, though scanty, country-based assessments.

The position of NewConnect against the Alternative Markets of European countries. The impact of GDP on volatility in the indices and turnover value